Although the temperatures and volume of snowfall differ wildly across the country, winter is a central part of the Canadian national identity. (Those situated further to the north enjoy making fun of Vancouverites, but several months of endless cold rain is just as miserable as sub-zero temperatures, ice and snow.) As an immigrant, I arrived in Canada, on a warm spring day, and I couldn’t imagine what the fuss was about. Before we left the U.K., a friend gave me a pair of beautiful hand-knit mittens, a cheerful yellow with embroidered flowers. “Those should get you through the worst of the legendary Canadian winters.” A kind thought, but by mid-November I was starting to feel the limitations of the lightweight synthetic yarn. The first time I heard Quebec folk singer Gilles Vigneault’s classic “Mon pays c’est l’hiver,” (which translates to “My Country, It’s Winter”) I didn’t really get it. By the first January in my new home, I started to get a sense of what he meant – and I agreed.

Another core facet of the Canadian national identity, though an admittedly more recent development, is television production. Every Canadian enjoys the particular frisson of spotting familiar locations when watching a movie or TV show that’s set in the U.S. “Why did that New York City taxi just drive past my bank branch?” Since the 1980s, thousands of movies and TV shows have been made here in Canada, with Canadian talent.

That ever-present winter weather presents many challenges for the crews that work on these projects, and costuming is a huge piece of it. 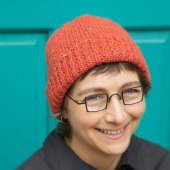 Kate Atherley (she/her) is a co-founder, editor and publisher at Digits & Threads and Nine Ten Publications. She has worked in the crafts industry in one way or another since 2002 as a designer, editor, writer, and instructor. She's authored eight books about knitting, from a next-steps guide for newbie knitters to the industry's only guide to professional knitting pattern writing. Kate lives in Toronto, Ontario, with her husband.

Get the latest news!

No spam, not ever.