A Visit to Fibrations Festival in Victoria, BC

I’ve long known of the Fibrations Festival, the event hosted by Knotty by Nature in Victoria, BC, the third Sunday of August each year, but I was never able to make the trip from Vancouver. Until this year! The early timing of the Jewish holidays coupled with eagerness to be amongst the craft community after such a long absence due to COVID-19, plus the unusual September date of the event, led to my stealing away for an entire day during my family’s busiest month of the year.

Sixty-eight vendors from around BC, most from Vancouver Island, displayed their wares on the grounds of a community centre, and through rain showers and bright sunshine, fibre lovers came together, many for the first time in over eighteen months. Yarn was aplenty, as were finished woven goods, and spinning fibre. The Victoria Handweavers & Spinners Guild, Victoria Quilters’ Guild, and Victoria Knitters’ Guild were all present, and The Makehouse, a Victoria fabric shop and sewing studio, held a felt-a-thon fundraiser for the Indian Residential School Survivors Society.

It was a true delight to meet Digits & Threads members and contributors in person!

Scroll through the image gallery, below, for a virtual tour of Fibrations. And look for us there next fall!

Correction: An earlier version indicated that Fibrations usually happens in September; usually the even is held the third Sunday of August.

For the first time since we launched D&T, we had something printed!

Vendor booths were all under cover, a convenience throughout a day that featured both rain and bright sunshine.

Victoria fabric and craft shop The Makehouse displayed an orange gown with an invitation to trace your hand on the skirt, in memory of the Indigenous children who never returned home from residential “school.” The shop also hosted a fundraiser for the Indian Residential Schools Survivors Society.

Meeting D&T contributors was also a true delight! Look for Coleen’s piece on raising silkworms, and Catherine’s writing about wool and yarn.

68 Vendors Participated in the Event

Meeting D&T members was a highlight!

Janna Maria Vallee of Everlea Yarn has written for D&T about tapestry weaving.

Sarah’s a D&T member, and she’ll soon be writing for us monthly to round-up news from Studio Hours. It was wonderful to meet her in person after so many Zoom hang-outs! 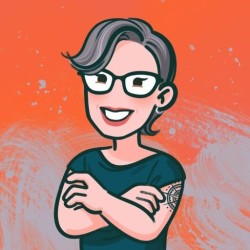 Kim Werker
Kim Werker (she/her) is a co-founder and publisher at Digits & Threads and Nine Ten Publications. She has worked in the crafts industry in one way or another since 2004 as an editor, writer, instructor and speaker. She's authored six books about crochet and one about making ugly things on purpose as a creativity exercise. Kim lives in Vancouver, BC, with her husband and son, and their mutt who's named after a tree.

We use cookies on this website to give you the most relevant experience by remembering your preferences and repeat visits. By clicking “Accept”, you consent to the use of all cookies.
.
Cookie SettingsAccept
Manage consent

This website uses cookies to improve your experience while you navigate through the website. Out of these, the cookies that are categorized as necessary are stored on your browser as they are essential for the working of basic functionalities of the website. We also use third-party cookies that help us analyze and understand how you use this website. These cookies will be stored in your browser only with your consent. You also have the option to opt-out of these cookies. But opting out of some of these cookies may affect your browsing experience.
Necessary Always Enabled
Necessary cookies are absolutely essential for the website to function properly. These cookies ensure basic functionalities and security features of the website, anonymously.
Functional
Functional cookies help to perform certain functionalities like sharing the content of the website on social media platforms, collect feedbacks, and other third-party features.
Performance
Performance cookies are used to understand and analyze the key performance indexes of the website which helps in delivering a better user experience for the visitors.
Analytics
Analytical cookies are used to understand how visitors interact with the website. These cookies help provide information on metrics the number of visitors, bounce rate, traffic source, etc.
Advertisement
Advertisement cookies are used to provide visitors with relevant ads and marketing campaigns. These cookies track visitors across websites and collect information to provide customized ads.
Others
Other uncategorized cookies are those that are being analyzed and have not been classified into a category as yet.
SAVE & ACCEPT

Get the latest news!

No spam, not ever.